Etah is a place that appears again and again in narratives of Arctic exploration, so well known that it still sometimes appears on maps although it has been abandoned for many years. Explorers visited and even stayed there again and again for a variety of reasons, but among the most important was the fact that they knew they would be likely to find Inughuit families there – people who could help them in variety of ways, from providing dogs to sewing clothing. The Inughuit were there because of the richness and variety of resources available to them – they returned to this location for many generations to take advantage of animals ranging from huge walrus to tiny dovekies.

In 2006 my colleagues from the University of California Davis and Nunatta Katersugaasivia /Greenland National Museum and I were interested in documenting how the Inughuit had coped with and adapted to all these newcomers appearing on their doorsteps in the late 19th and early 20th centuries. Etah was an obvious, and as it turned out, fruitful, place for us to start. We did not intend to study the archaeology of the Crocker Land Expedition, but we did take advantage of the fact that MacMillan and his team had lived there for four years. Photographs they had taken of the site guided us to Inughuit houses that had been abandoned by that time, allowing us to select houses that dated to sometime before 1913. 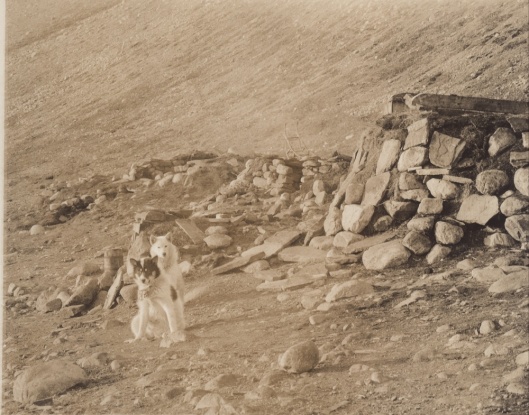 Inevitably, though, we did encounter material left behind by the expedition, and some of these provide personal links to expedition members.

Of these my favorite is this, a portion of a small decorative ceramic vase, now partially restored. With its gilt handles this stood out in the field as something interesting and different. We could see the word Carnegie over the door of the building painted on it and concluded that it was a Carnegie library. But which one? And what is a library doing on a decorative vase anyway? 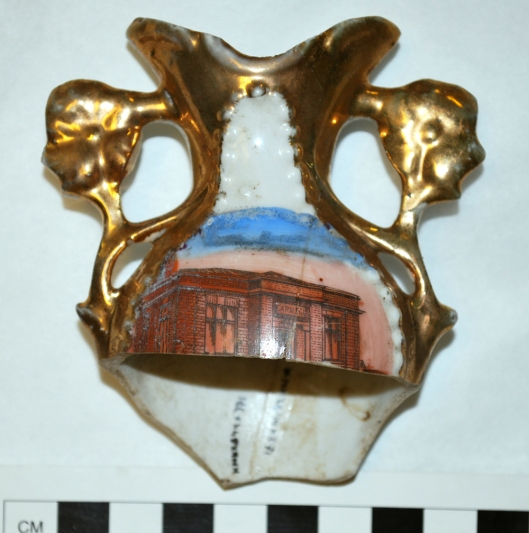 At the time I was confident that we could easily identify it when we returned from the field and it was one of the first pieces I tried to research that fall. I quickly learned that there are 1000s of Carnegie libraries (2509 according to Wikipedia), built in many different architectural styles. Regretfully I put the vase aside. Identifying the library was peripheral to our research and would have to wait for another time.

The question of why a picture of a library was on the vase was easier to answer. Around the turn of the century, such pieces were popular souvenirs and were produced by the 1000s.

The vase sat in our lab, and I returned to it occasionally over the next few years, but made no progress identifying the library. Then, while strolling in nearby Freeport, Maine, I chanced to look up at one of the storefronts in what had been the Bartol Library, a Carnegie library, and was struck by how familiar it looked. Could it be? I hurried back to the lab and compared the vase to contemporary and historic photographs of the library.

They certainly looked similar, but I wasn’t sure. Luckily, I found the Canadian Centre for Architecture, which has a large collection of such ceramics, including one depicting the Bartol Library. I sent them a photo of the vase, and they confirmed that they match – the vase we found had come from Freeport, Maine.

As far as I know, only one Arctic explorer is associated with Freeport, and that is Donald MacMillan.

Why he brought the vase to the Arctic is still a mystery. His association with Freeport was due to his sister, who had married a Freeport resident, and taken him in after their mother died in Provincetown, MA. Had the vase been a gift from his sister, to have as a reminder of her while he was away? Or did he purchase it as a souvenir to give away? He had made many friends on his first visit to the this area on the North Pole expedition in 1908-09, so perhaps her wanted to bring them gifts. Or perhaps it does not date to the Crocker Land expedition at all – maybe he brought it with him in 1908 and left it as a gift then.

We found the vase fragment in the rubble an entrance tunnel of one of the houses we excavated and it is not clear how it got there. It may have been dumped there, broken, by members of the expedition who used this spot as a disposal area (as other finds attest). But perhaps it had belonged to one of the occupants and broke before the Crocker Land Expedition even appeared at Etah. We may never know the answer, but perhaps when return this summer we will find more fragments which will help us sort out the full story.